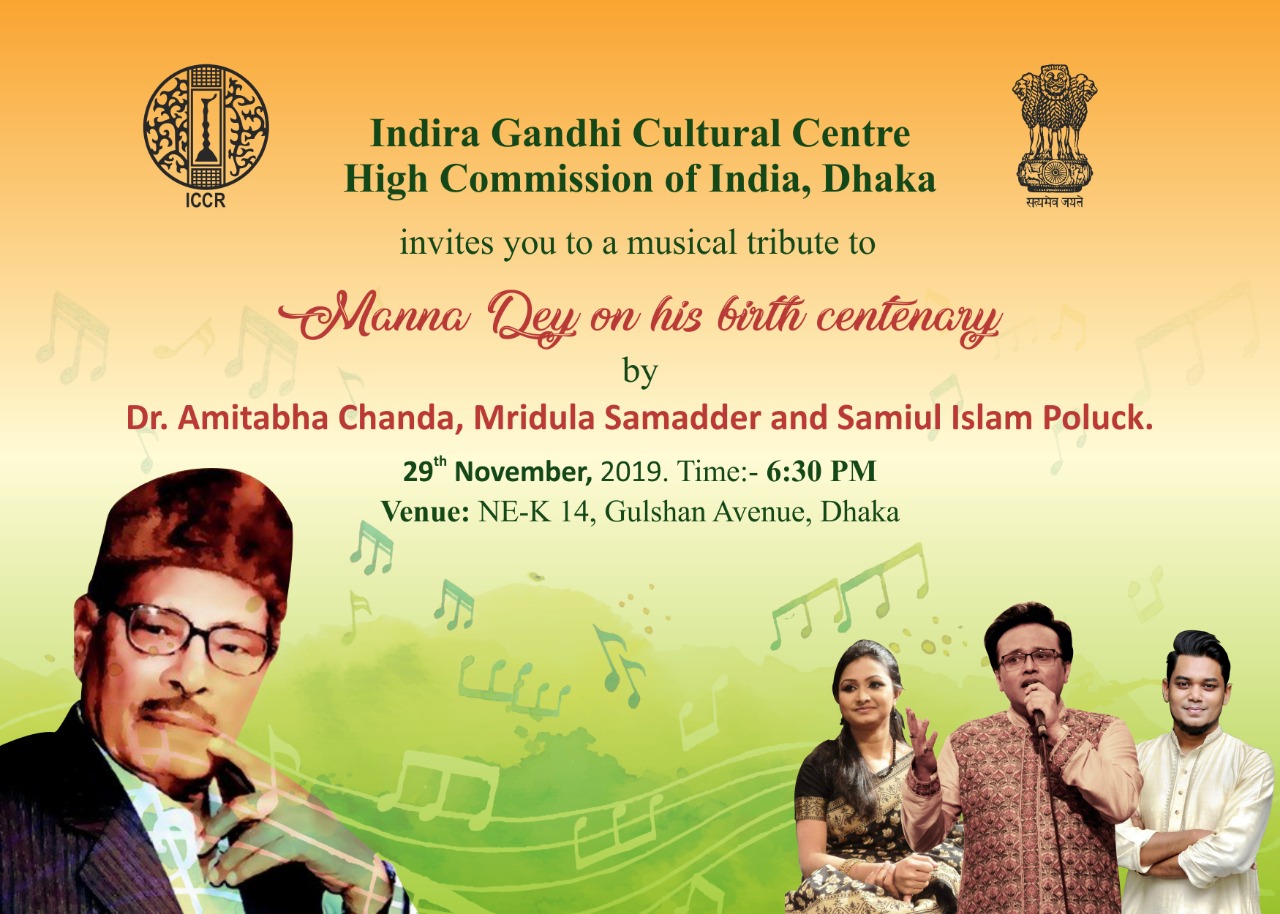 Manna Dey (1 May 1919 − 24 October 2013) was an internationally acclaimed Indian playback singer, music director, musician and Indian classical vocalist. He is considered one of the most versatile and celebrated vocalists of the Indian film industry. From the year 1942 to the year 2012, Manna Dey contributed immensely in the field of Indian Film Music as an arranger, singer and music director. Manna Dey received the prestigious Dada Saheb Phalke award in the year 2007 for lifetime contribution to Indian cinema. To commemorate the life and legacy of Manna Dey, IGCC, HCI Dhaka will host the musical evening on 29 November to pay tribute to the music genius.

Dr. Amitabha Chanda is a renowned neurosurgeon from India and is one of the pioneers of awake brain surgeries in India. He does regular stage performances in India and Bangladesh. Amitabha’s initial training of music started under the guidance of his mother who is trained in classical music. Later on, he started learning music from the famous guru and trainer in Kolkata, Shri Jayanta Sarkar. He is learning Rabindra Sangeet from the maestro Sadi Mohammad. He was closely associated with the legend Manna Dey, from whom he received invaluable tips in music. In 2018, he received “Bangaratna Gourab Samman” award from India both for neurosurgery and music.

Mridula Samadder is a music teacher at Excel Academy and is enlisted Artist of BTV & Bangladesh Betar. She is Principal at Surbani Lalitkala Academy.  She is recipient of awards from SHISHU ACADEMY, SHIKKHA SOPTAH, MOUSHUMI PROTIJOGITA e.t.c. She has performed in many Live TV shows along with performances in India. She is a member of Bangladesh-India Friendship Society, Bangladesh Nazrul Sangeet Sangstha, Cultural Secretary at Jatyio Khelaghor Asor, member at cultural organization "JOYODDHONI". Ms. Samadder is a member of 100 member Bangladesh Youth Delegation to India.

Samiul Islam Poluck was introduced into the world of recitation at a very tender age. He is a Gold Medalist at Jatiyo Shikkha Shoptaho and a regular artist of Bangladesh Television (BTV). His first solo recitation album “ITI RABINDRANATH” was released from Historical Music Label of India, Hindustan Records which is a smash hit. He also has in his credit Albums like “CHETONAR JHONKAR” from Ekattor TV, CHADER HASHI from Srinivas Music, AJI E BOSONTE from G-Series. He is recipient of Prayash Award, Minarva Rabindra Padak.