Rabindra Sangeet rendition by Rezwana Choudhury Bannya and her students. 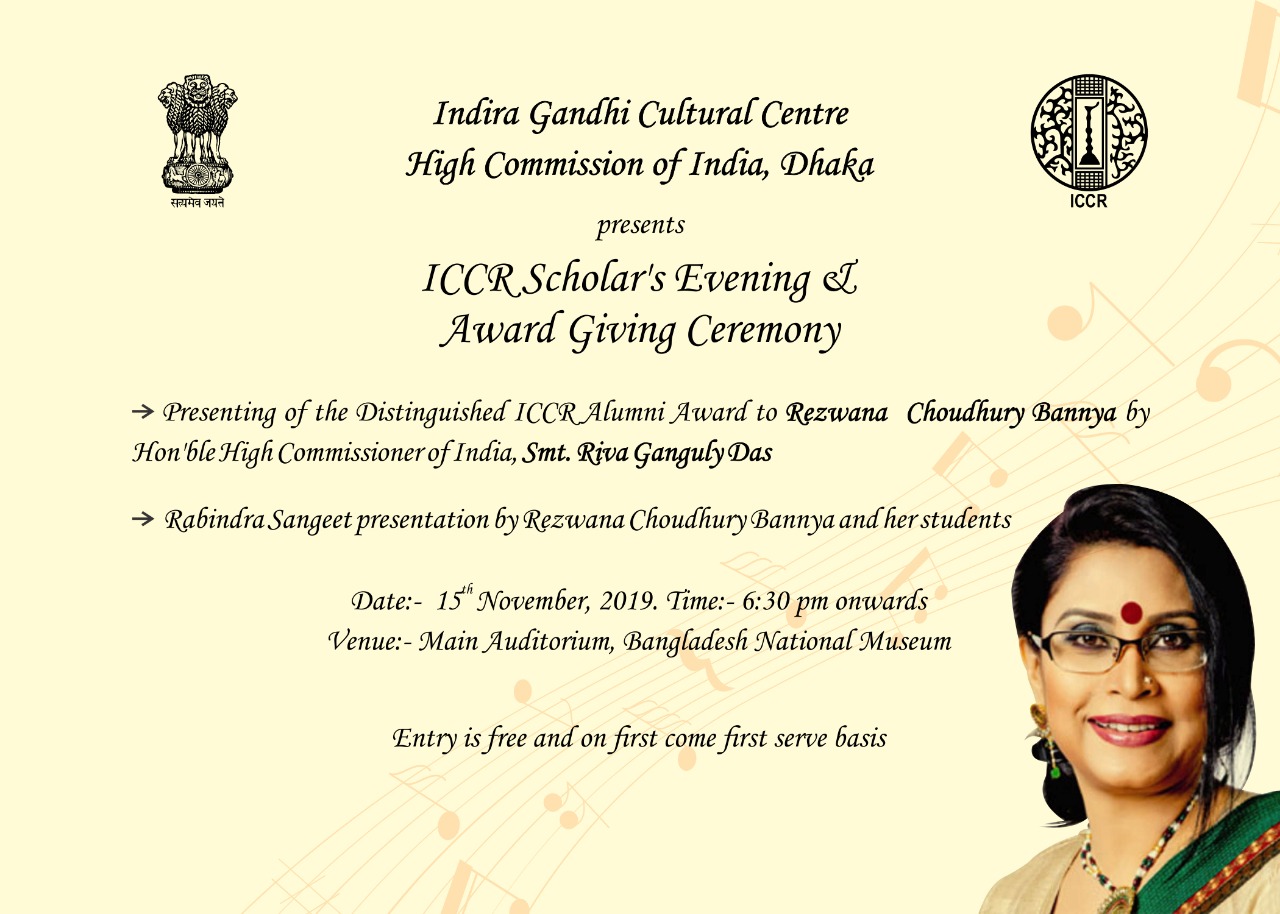 Rezwana Choudhury Bannya is a renowned Rabindra Sangeet singer of Bangladesh and has been singing from a very early age. She received her initial training at Chhayanaut.

She received the prestigious ICCR (Indian Council for Cultural Relations, Govt. of India) scholarship from the year 1975 to 1981 in order to pursue Bachelors & Masters in Rabindra Sangeet from Visva Bharati University, Shantiniketan. Post this, she pursued her professional training in Rabindra Sangeet under the Guru-Shishya Parampara of ICCR scholarship at Visva Bharati University, Shantiniketan.

At Visva Bharati, renowned exponents such as Kanika Banerjee, Nilima Sen, Asish Bandopadhyay and Santideb Ghosh were her mentors. In addition, she learned other forms of Bangla music such as the Folk Kirtan and the Classical Tappa. Among the instruments, she can play the Harmonium and the Esraj.

On completion of her training, she became recognized as a master in Rabindra Sangeet due to her clean rendition, impeccable accent and her willingness to tackle even the most difficult and least popular songs. She has traveled extensively and has produced numerous albums popular in many countries, most notably in Bangladesh and India.

Mrs. Bannya is currently the Professor and Founder Chair of the Department of Dance at the University of Dhaka. Previously, she had been an Associate Professor in the Department of Music at the same university. She founded Shurer Dhara in 1992, a school for learning music in Dhaka. She has more than twenty albums & eight prestigious awards to her credit; recently she received Doctorate of Arts “Honoris Causa” from Asian University for Women in the year of 2019.

In 2010, in order to commemorate the 150th birth anniversary of Rabindranath Tagore, she brought out a complete audio version of Gitobitan, called Shruti Gitobitan. She has rendered her voice to the song, “Vaishnava Janato ” produced by Ministry of External Affairs, Govt. of India to commemorate the 150th birth anniversary of Mahatma Gandhi to which artists from 124 countries had also contributed. She is the recipient of numerous awards and she will be presented with the prestigious “Distinguished ICCR Alumni Award” on this occasion by the High Commissioner of India to Bangladesh, Smt. Riva Ganguly Das.

All are cordially invited to attend the programme. Entry is open to all and is on a first come first serve basis.